Accurate fetal heart rate (FHR) assessment may help in determining the status of the fetus and indicate management steps for a particular condition.  In order to accurately assess a FHR pattern, a description of the pattern should include qualitative and quantitative information in the following five areas:

These areas include fetal heart rate patterns with specific definitions and descriptions.  These definitions and descriptions are the terminology used by the National Institute of Child Health and Human Development and have been adopted by the American College of Obstetrics and Gynecology (ACOG) and the Association of Women’s Health, Obstetric, and Neonatal Nurses (AWHONN).

To appropriately interpret a fetal monitoring tracing, the systematic approach below should be followed:

Uterine contractions are dealt with at the end of this section.

Demonstrated below is a picture from a typical EFM display and a sample EFM strip. 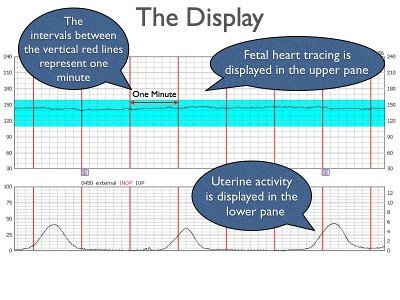 The mean FHR rounded to increments of 5 beats per min during a 10 min segment, excluding:

In order to determine whether there are changes in the fetus’ physiologic status, a baseline heart rate must first be determined as a reference. All changes are therefore, based on a deviation from that fetus’ resting norm.

The normal FHR baseline should range between 110 beats/min to 160 beats/min. The baseline FHR is normally set by the atrial pacemaker and the beat-to-beat differences in the heart rate are governed by a balance between the sympathetic and parasympathetic branches of the autonomic nervous system.

As the central nervous system matures, the baseline FHR gradually drops, and the normal ranges for a mid-trimester fetus are between 150-170 beats/min. Parasympathetic tone becomes more dominant with advancing gestational age, and a post-term fetus may have a FHR between 110-120 beats/min. 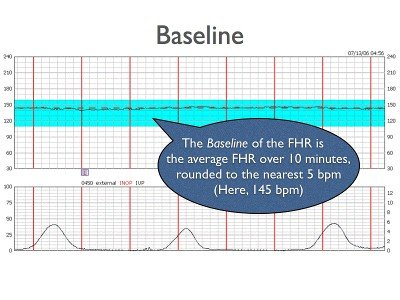 In the normal fetus, there is an interplay between the sympathetic (acceleration) and parasympathetic (deceleration) nervous systems in the control of heart rate.  These systems exert their control via the cerebral cortex, the medulla oblongata, the sympathetic ganglia and the vagus nerve. The interaction between these systems results in a difference in the beat-to-beat intervals resulting in variability of the fetal heart rate tracing. In the term fetus, moderate variability is considered normal as it indicates a normally functioning central nervous system.  Conditions that alter the integrity of this neuro-cardiac axis, such as hypoxemia, result in loss of heart rate variability. Variability therefore, is the single most important indicator of an adequately oxygenated fetus.  Below is example of moderate variability. 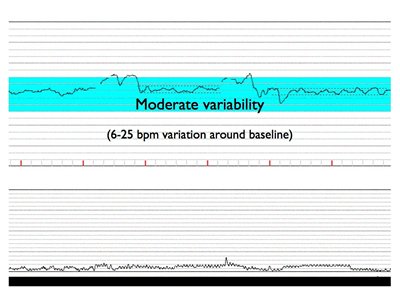 Decreased or absent variability therefore represents some dysfunction in one or both of these systems, or in increased and dominant tone of one system over the other, such as during sleep cycles or due to the effects of drugs.

Causes of decreased variability include:

Below is an example of minimal variability. 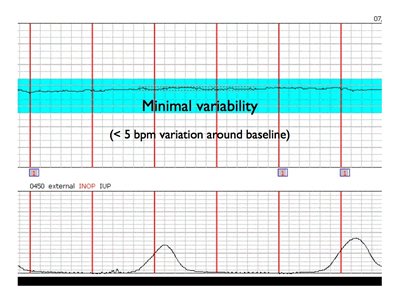 Here is an example of absent variability: 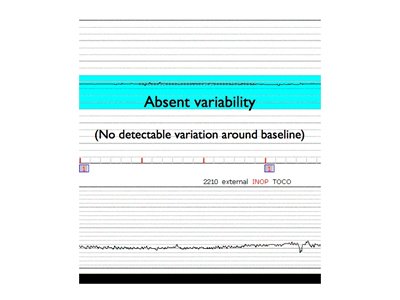 Marked variability in the baseline FHR is present when the amplitude exceeds 25 BPM.This pattern (sometimes called a saltatory pattern) suggests acute hypoxia or mechanical compression of the umbilical cord and is often seen during the second stage of labor. When coupled with decelerations, this pattern is considered non reassuring and should warn the physician to search for, and correct, potential causes of hypoxia. Causes of marked (increased or saltatory) variability include:

Here is an example of marked variability: 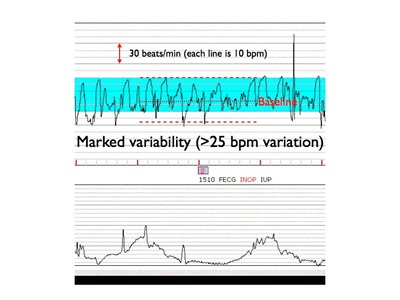 Two types of variability have also been described prior to the NICHD definitions. Short term variability (STV) describes the beat-to-beat fluctuations in the FHR measured from R wave to R wave by fetal ECG. Long term variability (LTV) represents the amplitude changes of the normal baseline over time, with a cyclic changes occurring in less than one minute.

The NICHD does not distinguish between LTV and STV, because they are viewed as a unit when the FHR is visually analyzed. Additionally, LTV and STV generally respond synchronously in response to changes in autonomic tone, and thus differentiation between LTV and STV generally does not provide additional information regarding the fetal oxygenation. There are some special circumstances where this not true; for example, a fetus with severe anemia demonstrates a pattern with absent STV but present LTV. This unique tracing is referred to as a sinusoidal pattern and will be discussed separately.

Accelerations of the FHR may be periodic (that is, occurring in relation to a contraction) or episodic (no association with a contraction). Most are episodic. These episodic accelerations are generally in response to fetal movement, with a need for increased perfusion, and therefore transiently increased sympathetic tone, or due to fetal stimulation, such as scalp stimulation with a vaginal exam, abdominal palpation, or vibroacoustic stimulation.

Periodic accelerations are those associated with uterine contractions and may be due either to fetal stimulation (particularly in breech presentation) or due to mild cord compression (that is, compression of the umbilical vein only).

FHR accelerations and good (moderate) variability are closely associated and sometimes may be visually indistinguishable, though both are reflective of a well-oxygenated fetus.

The presence of accelerations forms the basis of the nonstress test (NST). An NST is said to be reactive when there are at least two accelerations in a 20 minute period, along with moderate variability and no decelerations.

Below is an example of fetal acceleration: 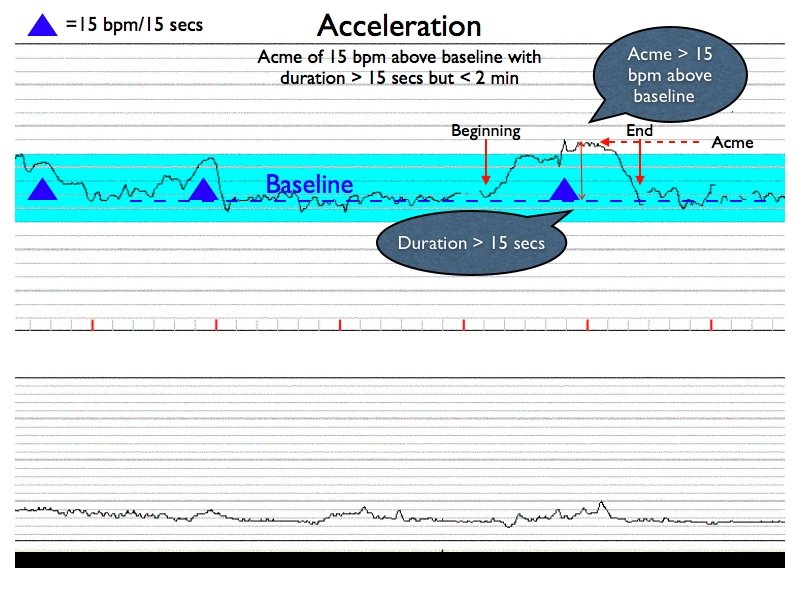 Fetal bradycardia is commonly associated with fetal hypoxemia. However, a number of causes must be considered:

As with fetal tachycardia, the bradycardic FHR must be analyzed for the presence of periodic changes and decreased variability. These findings are more consistent with hypoxemia. Some fetuses may display a bradycardic FHR but be completely normal. It should be remembered that the range of 110-160 does not represent all normal fetuses. The likelihood of a FHR in the range of 100-110 representing a normal variant increases as the fetus, and its nervous system, matures. 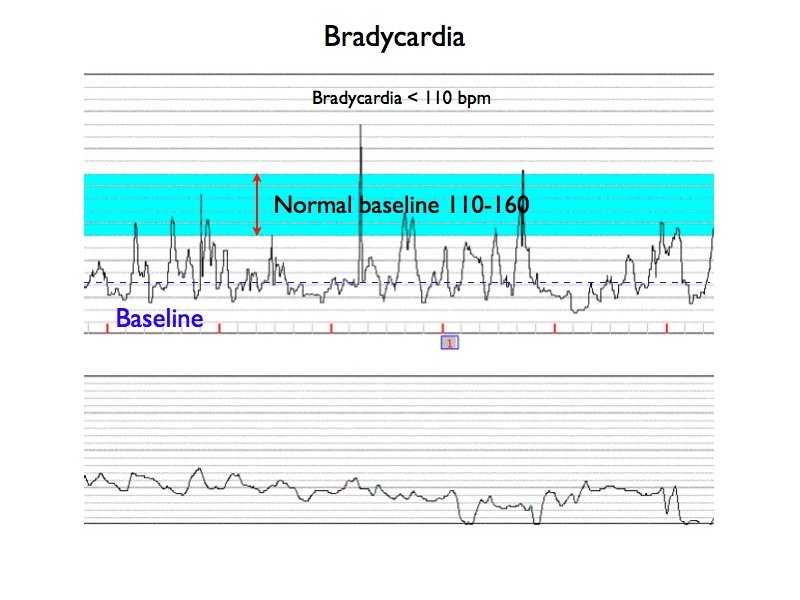 An early deceleration and a late deceleration may visually appear identical. Both are smooth and curvilinear and appear to be a mirror image of the contraction. The distinction between the two is based upon the relationship of the deceleration to the uterine contraction (UC).

Early decelerations correspond, temporally, to the contraction and therefore exist only as a periodic change. Early decelerations are a benign finding caused by a vasovagal response as a result of fetal head compression by the contraction. Pressure on the fetal skull alters the cerebral blood flow and this in turn stimulates the vagus nerve. The heart rate is gradually decreased as the pressure of the contraction intensifies, and the deceleration gradually resolves as the pressure resolves. This pattern is generally limited to the active stage of labor. If the pattern is found in early labor, it may be associated with cephalopelvic disproportion (CPD).

Early decelerations have not been associated with fetal hypoxemia or acidosis. 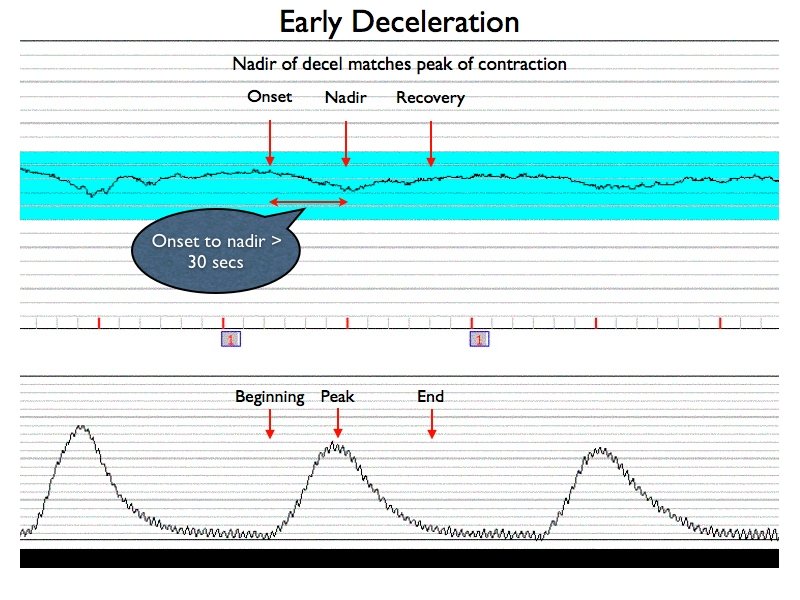 Though late decelerations share the same morphologic shape as early decelerations, they tend to appear late, after the onset and nadir of the contraction.

Placental dysfunction, too, may lead to a decreased maternal-fetal oxygen transfer, and/or a smaller volume of placental reserve in proportion to fetal need.

Any of these causes may eventually lead to fetal hypoxemia and eventually myocardial depression. A vasovagal reflex leads to cardiodeceleration and continued hypoxemia may lead to lactic acidosis secondary to anaerobic metabolism.

Reflex late decelerations are thought to be due to vagal stimulation by chemoreceptors in the head in response to low oxygen tension. This is accentuated by the decreased oxygen transfer during a uterine contraction. The hypoxemia results in increased sympathetic stimulation leading to increased systemic vascular resistance. The response to this increased pressure is a vagally mediated decrease in heart rate. This dual reflexive response may explain the delay in the heart rate following a contraction. Reflex late decelerations are associated with normal FHR variability because CNS system is intact.

The causes of UPI are varied, and many are reversible: 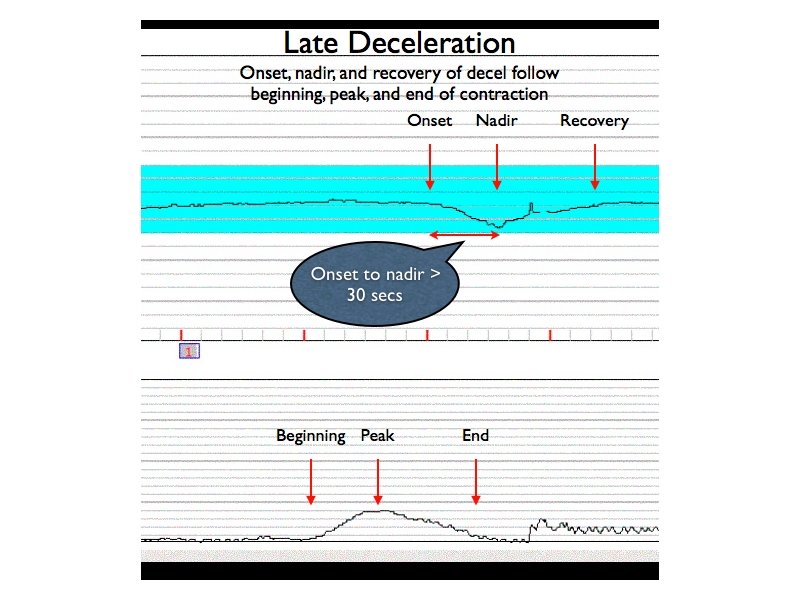 There are several causes of fetal tachycardia that must be considered, including:

In general, tachycardia from any cause is related to an increase in sympathetic tone and/or a diminishment of parasympathetic tone. This means that one would normally expect an overall decrease in variability in association with tachycardia.

Fetal tachycardia is occasionally seen after a deceleration of the FHR, and in this instance is likely indicative of hypoxemia. This may be due to an attempt by the fetus to increase perfusion by increasing cardiac output or it may be due to increased catecholamine activity from the adrenal medulla in response to the stress of hypoxemia, when associated with a deceleration, and the loss of vagal tone.

Because the mechanisms for tachycardia related to hypoxemia are predisposed by some other signal hypoxic event, such as a prolonged deceleration, then isolated tachycardia, without evidence of periodic changes and in the presence of normal, though slightly diminished variability, is almost always due to a cause other than hypoxemia. Fever and/or chorioamnionitis are very common causes and fetal tachycardia may persist up two hours after correction of maternal fever. 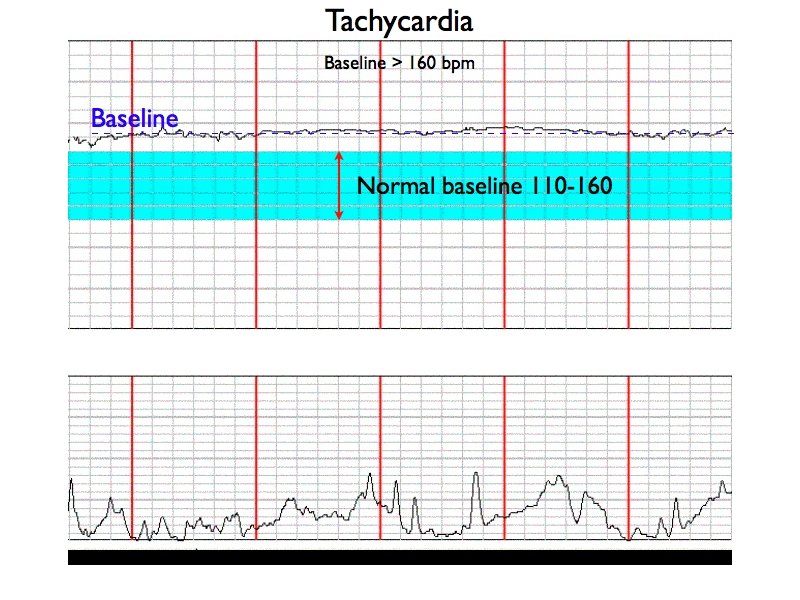 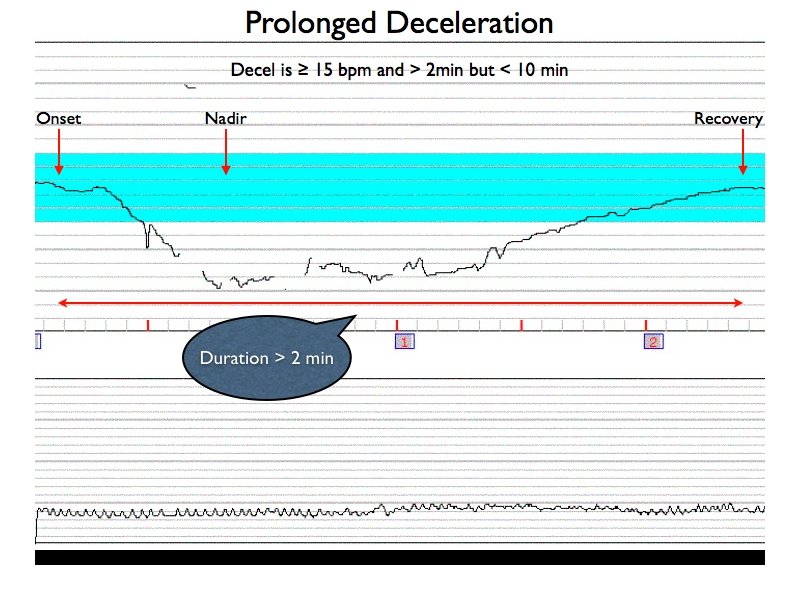 Variable decelerations appear morphologically different from either early or late decelerations. They are characterized by a sudden, abrupt drop in the FHT along with usually a similarly abrupt return to baseline. The shape varies widely, and they may appear as a V, U, or W. They may be either periodic or episodic. Often, there are small accelerations immediately before and immediately following the deceleration. These associated accelerations are often referred to as shoulders.

The classic mechanism described as the cause of variable decelerations is umbilical cord compression. Initial or mild umbilical cord compression results in occlusion of the umbilical vein, which is larger than the arteries and less rigid. This results in decreased venous return resulting in reflex tachycardia to maintain cardiac output. This explains the initial increase in heart rate (shoulder) preceding the deceleration. Further compression of the cord leads to occlusion of the umbilical artery, and the resulting increased systemic resistance, sensed by the baroreceptors, results in a protective reflex slowing of the heart rate. As the cord is decompressed, this series of events is reversed, and an acceleration may follow the deceleration (artery is decompressed but the vein is still compressed) prior to returning to baseline.

Variable decelerations are classified as severe when they last more than 60 seconds, fall below 70 beats/min, or have a drop of 60 beats/min below the baseline rate.

Variable decelerations may be seen in the antepartum or early in labor if associated with oligohydramnios. Similarly, they may be detected after rupture of membranes, and in this setting they may portend cord prolapse, particularly if rupture of membranes occurred prior to engagement of the presenting part. During the descent phase of labors, typically between 8-10 cm cervical dilation, variables may be associated with nuchal cords causing cord stretch or compression, or with head compression associated with rapid descent and maternal valsalva. 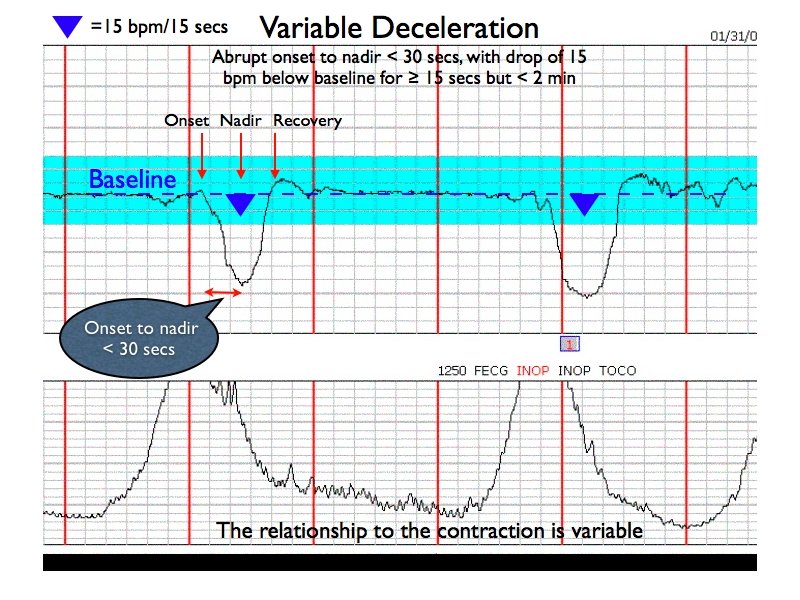 A normal contraction pattern is demonstrated in the picture above with contractions every 2-3 minutes.

Quantitative methods include Montevideo units (MVUs), Alexandria units, Active Planimeter units, Total planimeter units, and average rate of rise. Commonly, only MVUs are used in the US outside of research protocols.

With an IUPC in place, quantitative data can be measured, most commonly using Montevideo units (MVU). A Montevideo Unit is the sum of the intensity of each contraction in a 10 minute period (in mmHG). Adequate uterine activity is defined as a contraction pattern that generates greater than 200 MVUs. Studies have shown that this threshold is adequate for 90% of labors to progress. Among women in spontaneous labors, more than 40% have MVUs > 300 mmHG.  Baseline pressure, or resting tone, is the uterine pressure in mm Hg while the uterus is relaxed. 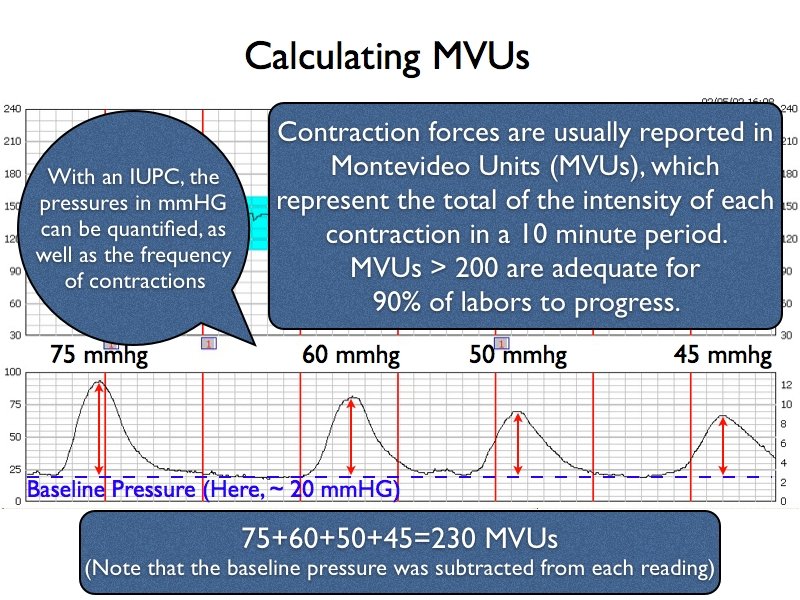 The most common cause of a tachysystolic, polysystolic or hypertonic contraction  pattern is  oxytocin or prostaglandins.