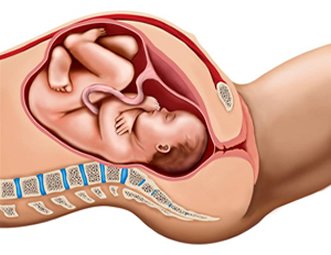 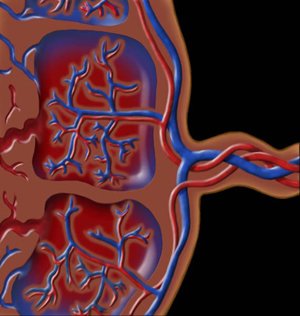 Fetal oxygenation is therefore dependent upon maternal blood pressure and oxygenation, the integrity of the placenta, specifically the amount of surface area for oxygen transfer, and the patency of the umbilical cord.  Anything that disturbs this chain of oxygen transfer will consequently affect fetal oxygenation.  This disturbance in transfer of oxygen from maternal blood to the fetus is called uteroplacental insufficiency (UPI).

The concept of fetal oxygen transfer is analogous to someone holding his breath underwater in an indoor swimming pool. Contractions are similar to a  swimmer ducking his head underwater for 30-45 seconds at a time every 2-3 minutes. While the swimmer is underwater, he has only his “cardiopulmonary reserve” to sustain him. When he is above the water, he may restore that reserve. This is not unlike the fetus with its placental reserve When the uterus contracts and relaxes.

As long as the swimmer is healthy, he can tolerate this repetitive submersion for hours without adverse effects, just as a normal healthy fetus may tolerate repetitive contractions during labor for hours.

Uteroplacental insufficiency really describes a problem with oxygen transfer in one or more of three compartments, the placenta, the uterus, and the mother’s perfusion of the uterus, leading to fetal hypoxemia.  Using the swimming pool analogy, if the swimmer has poor cardiopulmonary reserve (e.g. lung disease), he may not be able to tolerate continued submersions for very long because his ability to take in and transfer oxygen would be affected. In the same way, if the placenta  is abnormal (e.g. infarcted, too small, or abrupted), the fetus may begin to suffer from hypoxemia secondary to poor oxygen transfer during uterine relaxation .

If the swimmer is submerged too often underwater or for too long, then he may not have sufficient time to recover between submersions. Similarly, if uterine contractions are occurring too frequently (hyperstimulation) or are lasting too long (uterine tetany), then the placenta may not have time to absorb oxygen from maternal blood between contractions.

Lastly, if the atmosphere surrounding the swimming pool is smoky or has decreased oxygen tension, then even if the swimmer is healthy and has adequate time to recover, he may not be able to absorb oxygen when he is out of the water. In the same way, if the mother is hypotensive, hypoxic, or for any other reason underperfusing the placenta, then the baby will suffer in spite of the fact that the placenta may be healthy and the contractions are within normal limits.

The swimmer’s analogy holds true when thinking about the potential reversible causes of uteroplacental insufficiency. Many of the causes that are uterine or maternal in origin can be easily reversed, such as uterine hyperstimulation or maternal hypotension, just like it would be easy to have the swimmer stay under water for a shorter duration of time or have him breathe cleaner air when not submerged.  But placental causes, such as infarction or abruption are likely to not be ameliorated by normal resuscitative measures.

Neural Control of Fetal Cardiac ActivityAnother cause of decreased fetal oxygenation is decreased umbilical cord patency (cord compression).  In the analogy above (although not anatomically analogous), imagine the swimmer having to breathe through a snorkel each time he comes out of the water.   If the lumen of the snorkel were compressed, the swimmer would have difficulty recovering when he is out of the water.  Similarly, any event that causes umbilical cord compression will decrease oxygen delivery to the fetus. 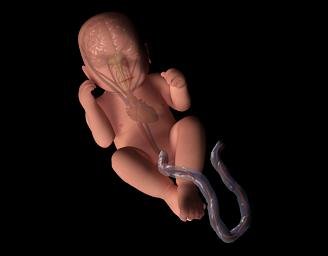 Fetal oxygenation affects the function of the fetal brain which in turn affects the function of the cardiovascular system.  The fetal heart has intrinsic activity based on inherent tissue automaticity.  Cardiac contractions are mediated by signals arising at the sinoatrial node, passing to the atrioventricular node, and continuing throughout the ventricles.  As the autonomic nervous system fully develops by 24 to 28 weeks, several extrinsic parameters begin to influence cardiac rate.  The effects seen are a result of changes mediated by chemoreceptors, baroreceptors, circulatory catecholamines, central nervous system influences, and hormones.  The sympathetic and parasympathetic nervous systems exert their complex yin-yang effects on a second-by-second basis.

Sympathetic simulation results in norepinephrine release contributing to increases in both chronotropy, inotropy, and systemic vascular resistance.  Parasympathetic stimulation influences fetal heart rate (FHR) by decreasing rate and by providing an oscillating effect that contributes to variability.  The components of this cardiac regulatory system make up a pathway from the fetal cerebral cortex through the cardiac integratory center in the medulla oblongata, the vagus nerve, and the cardiac conduction system.  The complex interaction between the factors above result in the variation of the fetal rate.  This pathway is dependent upon the physiologic status of the fetal brain.  Any factor that affects the fetal brain, such as oxygenation,  will alter this pathway.  Therefore, changes in fetal oxygenation will correspondingly be reflected in a variation of cardiac activity.  It is this concept that is the basis for fetal heart monitoring.  By evaluating the patterns of cardiac activity, fetal oxygenation status and physiologic integrity may be inferred.